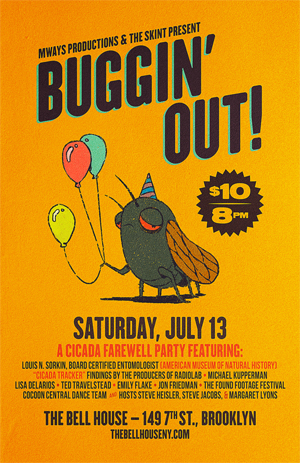 People in New York are notoriously flaky about making plans. None more so than the cicadas—those chirpy flying roach-type things that replied to our city’s collective Facebook invite 17 years ago, promising to burst out of the ground this spring like a crunchy blanket of terror. We expected a buggy apocalypse; we got little more than a few flaccid news headlines. Well, some of us already bought our cicada costumes, so we’re throwing the pests a party anyway. Join us for a farewell bash that will be one part scientific presentations about the insects that stood us up, and one part cicada-inspired comedy by New York’s funniest performers. Plus, stick around after the show for a free screening of 1954′s classic sci-fi film, THEM!